Raymond B. Johnson is a 22-year member of the Barbershop Harmony Society.  Ray’s first directorial position was as assistant director of his home chorus the Berkshire Hillsmen under Mike Joyce.  He then served with the Vocal Revolution (then Sounds of Concord) as interim director, before they found Dan Costello.  He further honed his skills after moving to Missouri while serving as musical director to the Voices of America.  Now back in New England, Ray is excited to be a part of the Post Road Chorus and is ready for the journey ahead.  PRC will be growing into and becoming the fulfillment of their mission.

As a singer, Raymond has been classically trained as a boy soprano, and then learned the Broadway-style of singing in college at the Hartt School of Music.  It was at the Hartt School where Men In Black formed with Ray singing baritone.   In 2005 they won the International Collegiate Barbershop Quartet Contest of the BHS.  They have competed in the semi-finals of the ICCA for the Northeast, and have performed at the finals of the Harmony Sweepstakes.  In their 12 years together they have performed in more than half of the states in the US, throughout Canada, and as far as Finland.  Sharing this lifelong passion for excellence in a cappella ensembles is something Ray loves to do.  Whether singing in a show, performing in an ensemble, or directing a chorus, his love for music and joy of singing always come first. 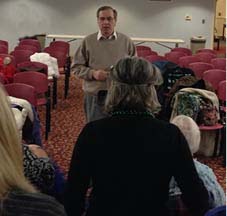 We also are lucky to have such a wonderful interim director and backup director in Bill Mitchell. A past director of the Worcester Men of Song, and district quartet champion with The Classified Lads, Bill has been involved in the education of barbershop singing for over 40 years. He is known to be an outstanding  vocal performance coach, but is probably best known for his arranging skills,having provided arrangements for many International Champion quartets including The Boston Common, Marquis and Platinum.  He has been on staff with the Harmony College team for the past 5 years in addition to his Co­Registra position with the NED's  Events Team.
↑